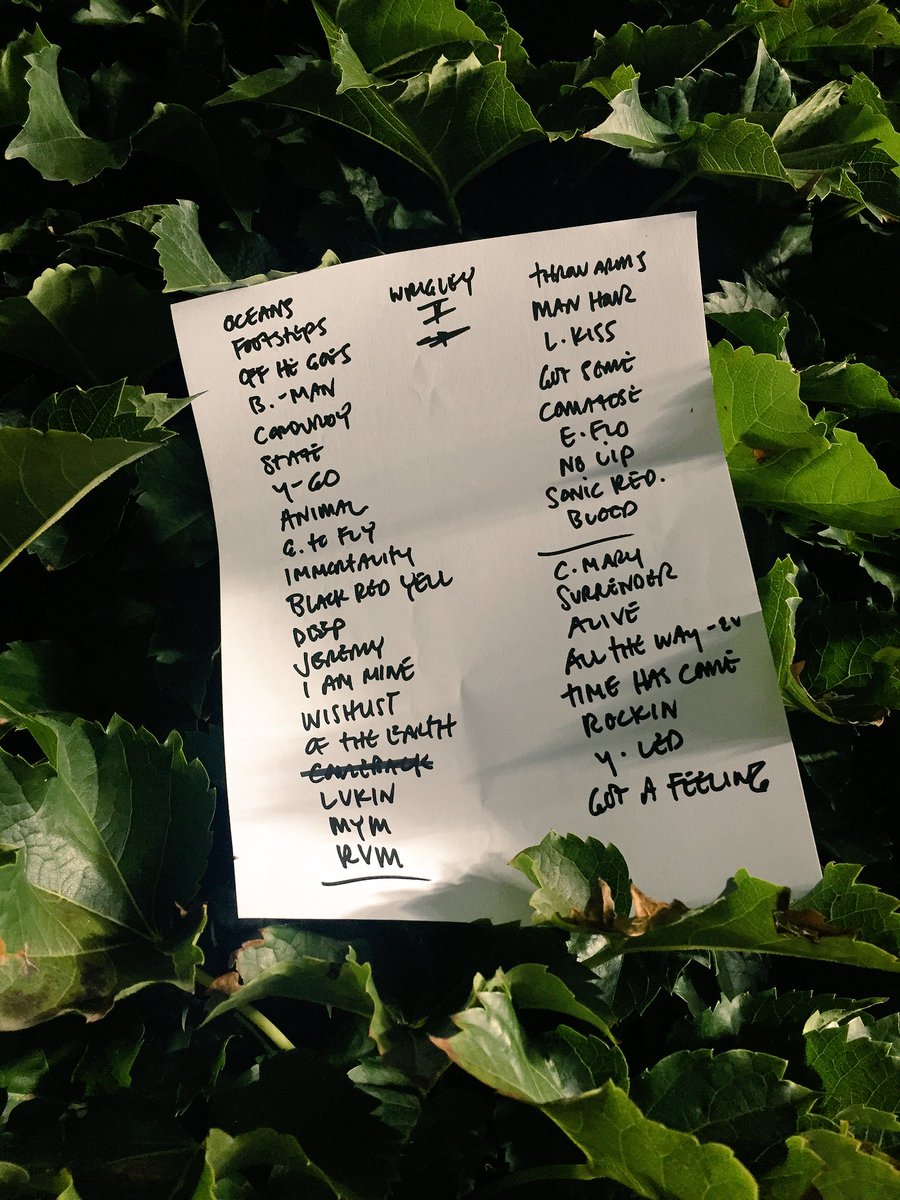 Main Set: Low Light, Release, Rain, Elderly Woman Behind The Counter In A Small Town, Do The Evolution, Last Exit, Lightning Bolt, Sad, Amongst The Waves, Even Flow, Light Years, I Got Id, Mind Your Manners, Unthought Known, Masters Of War, I Am A Patriot, Daughter/(W.M.A./Another Brick In The Wall (Part 2)), Jeremy, Better Man/(Save It For Later)

Encore 3: All The Way, Baba O’Riley

The first of the two Wrigley 2016 shows starts off with Low Light, as Ed pleads with the weather: “clouds roll by…” Immediately after, Ed shares “the last time felt like a once in a lifetime experience…and then when the lightning hit, I was hoping it was a once in a lifetime experience…but nature is working with us tonight, and I think you’ve earned it…is there a guy named John in the front? Where’s John? Just want to point out someone here up front because he was the first guy in line two days ago…four days ago…and he wanted to be in front for this song because it meant a lot to him and he’s going through some stuff, and we’re gonna help him out,” leading to an emotionally charged performance of Release.

After Release, the band launches into a cover of The Beatles’ Rain, another not-so-subtle nod to the weather the last time they played Wrigley. When Lightning Bolt starts, Ed remarks “gutsy move playing this one…” Amongst The Waves is dedicated to “Lake Michigan on a windy day.” Before Light Years, Ed wishes Gord Downie, the singer of the Tragically Hip who had recently been diagnosed with brain cancer, well on the last night of their farewell tour, saying “I just want to send them our energy from our gathering up to their gathering and wish the best to Mr. Gord Downie, we love ya.” Masters of War is performed electric, which gives the typically folk-tinged ballad an ominous, harder-edged feel. During the Save it for Later tag on Better Man, Ed hilariously goes off on a fan in the front row wearing a Whitesnake t-shirt, luckily the women next to him were wearing a “Janet Fucking Weiss” shirt and an “Unfuckwithable” shirt, which Ed gushes over.

After the break, Ed talks about the meaning behind the song Bee Girl, and how kids are exposed even more now, referring to Instagram as “Instaounce” and wanting them to be unfuckwithable, referring to the shirt again. During Just Breathe, Army Sgt. Kyle Johnson proposes to his girlfriend Amy, assisted by Ed, who changes the line to “he’s a lucky man.” Let Me Sleep is introduced as “a little number from a long time ago…it was written in Seattle the first winter I was there and it was snowing, which is rare for Seattle but the song was actually informed from experiences here, and growing up waiting on that fucking L train at 2:30 in the morning with 25 below windchill, thinking I was maybe not gonna make it through the night and wishing I had money for a cab.” Steve Gleason is brought out before Inside Job and delivers a message to the crowd, inspiring a powerful performance:

If you want my opinion, this stadium and this field are most sacred ground. Like all of you, I’m inspired and strengthened by the music of these guys. Mike and I have been friends for almost fifteen years and I’m grateful for the relationship that my family has with the Pearl Jam family. This next song is one of my all-time favorite songs ever. Everyone who has a heartbeat will face adversity but when you experience those moments, like the message in this song, please remember this, how we choose to feel is how we are and personally, I feel fucking awesome.

Before Comfortably Numb, Eddie thanks Steve and talks about being young and living in Chicago, saying:

Prior to All The Way, Ed waxes poetic about the Cubs, then a triumphant Baba O’Riley closes out the night.