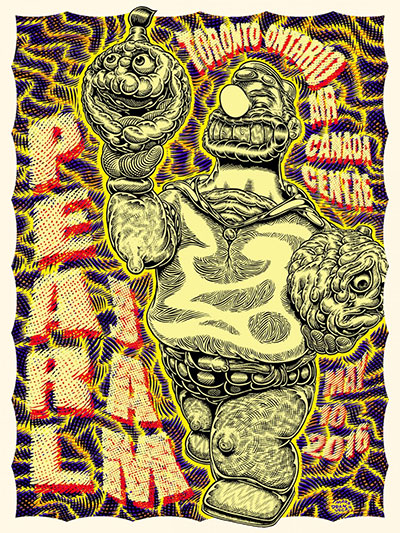 Encore 1: Imagine, Let Me Sleep, Comfortably Numb, Even Flow, Down, Better Man/(Save It For Later), Porch

Encore 2: Elderly Woman Behind The Counter In A Small Town, Given To Fly, State Of Love And Trust, Black/(Time Heals), The Real Me, Alive, Rockin’ in the Free World

Crowd erupts as the intro of Go is played just like on the album. A thunderous Mind Your Manners precedes the Binaural set, with Ed mentioning that they have the next night off (the second Toronto date was pushed back a day by their NBA playoff game). He then talks about how the first time in Toronto they played seven songs, and then auctions how many they’ll play that night, “nine, 10… can I get a 13… 18 in the back.” A longer solo from Mike on Breakerfall helps tear open the album set.

Evacuation is introduced with a reflection about fire alarms and expecting to be told it’s a false alarm, remembering the over 88,000 people evacuated days earlier due to wildfires in northern Alberta. Ed introduces Thin Air by explaining that it’s one of his personal favorites of Stone’s: “if we ever had a popular song, this would be the one” and describes how he’d imagined a love song-style video. Near the end, he visits the crowd, takes a fan’s hand, and puts his arm around him while they both sing the last chorus together, essentially recreating his idea for the video. Back onstage, Ed quips “What’s your name? JP? Meet you after the show, handsome.” Ed enters Sleight of Hand too early, Stone stops playing immediately and Ed gestures to the band to start over while pointing to himself to accept the blame, then turns back and tells the crowd

“the thing about vinyl records is sometimes they skip…let me clean the needle.”

The song is restarted and finishes strong. Soon Forget is prefaced with “it wasn’t written about anybody in particular…now I realize it’s exactly about Donald Trump” before going on to muse about the band moving to Canada and Ed changing his name to Geddy Vedder in honor of Rush. The crowd whistles back at the “we’re all whistling” line and Ed eggs them on, hanging on to that chord. Ed holds out the last note in Parting Ways for several seconds amidst guitar feedback, pick scraping, and resolute drumming. Corduroy has an extra burst at the end, and a breakdown jam on Rearviewmirror featuring a Jeff and Matt standoff. The second set opens with Ed checking on the crowd and counting off all their good memories of Toronto, including all the other bands they’ve seen play, and joking about how good Soundgarden’s drummer was as a prelude to introducing Matt. Here he announces the band will donate money from their Canada shows to help wildfire victims in Alberta and lists the benefitting groups, before asking the audience to light up the room with their phones for the cover of Imagine.

Let Me Sleep is played as a nod to the cold. Even Flow picks things back up and sounds like it has an extra groove to it: Mike puts the guitar behind his head and ventures out to the crowd for the first part of an extended, feedback-laden solo that earns Ed’s applause, and Ed tosses the mic into the crowd for fans to sing the last chorus. Down is dedicated to Howard Zinn, “the ultimate ‘positimist,’ that’s not a word, but….” Ed teases the crowd with a long pause and a swig of wine before a sustained “ohhh-oh-oh” to open the second verse of Better Man. Matt, Jeff, and Ed fling, headbutt, and practice boxing with the lamps that have lowered to stage level during Porch, and give the first encore an amped-up finish with Ed mingling in the crowd and sipping a fan’s beer. Ed starts the second encore with the observation “if they got a crowd tomorrow with this much energy tonight they might win it all” and identifies the band and Toronto as both being from the north:

“there’s power in north, north points up.” After Given To Fly, Ed calls everyone’s attention to a fan who’s spent the entire show in a bright orange ski mask and references having worn one at a show by Jeff’s band RNDM but “I didn’t last three songs in that fucking thing…I commend you”

and jokingly introduces the fan as Matt Damon (who was evidently in attendance in a different part of the arena).. Black winds down with the Todd Rundgren “Time Heals” tag. The Real Me is introduced by Ed saying

“We borrowed a couple of great songs tonight, we’re gonna borrow one more.”

Toronto native and Prince guitarist Donna Grantis is welcomed onstage to close the show with Rockin’ in the Free World and steals the show, earning a “we’re not worthy” bow from Mike.