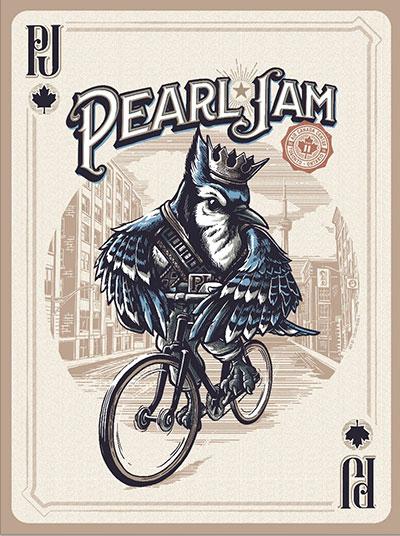 Jeff is wearing a t-shirt that reads “WE THE NORTH WEST,” a running theme started at the first Toronto show two nights before. The greeting comes before the callback in Corduroy with “welcome to the last show,” describing it as feeling like the “last day of school, let’s make a night of it.” During Brain of J., Jeff ducks and then laughs as Ed rushes to catch something dropped from above. After Animal, Ed says “good things been happening in this building in the last couple days,” in reference to the first Toronto date and the NBA playoff game the previous night, and toasts to being able to play the last show in Toronto.

Following Garden, Ed mentions the victims of the forest fires in Alberta and Manitoba evacuated days earlier and that the band will continue to “send some dough their way” from concert proceeds, and dedicates I Am Mine to “being safe and secure, however temporarily.” Good crowd participation during Nothingman. After Cropduster, Ed explains the origin of the line “let the fluency set it down” as coming from drinking wine with an Italian who didn’t speak perfect English, he figured he was trying to say

“‘go with the flow’ or something…but then I thought ‘that’s really kind of amazing,’ so I’ve been letting the fluency set it down for quite some time now.”

“monument or erection…of course, you here have the band Rush, that’s a monument…we’ve been playing for 25 years and if we wanted to learn a Rush song we’d probably have to play for 25 more,”

to which Mike plays a few chords of “Fly by Night” followed by Jeff and Matt with “Cygnus X-1”. Ed returns to monuments/erections by citing the Space Needle and introducing Even Flow as being written right below it.

A drum solo by Matt tops off another impressive solo performance by Mike. Ed switches the lyrics to “white male Canadian” during the W.M.A. tag. Prior to Alone, Ed thanks the crowd for their singing and teases “Right now we’d like to play the whole Binaural record for you.”

Ed promotes EB research funding during the break and thanks Dr. Elena Pope at the U of T-Hospital for Sick Children for signing onto the effort. On being shown a French flag, he recalls the terrorist attack at the Eagles of Death Metal concert in Paris the year before and dedicates Just Breathe to a fan and victim, Pierre-Antoine Henry, and his kids. Breath is dedicated to their friend Michele (Anthony), who “specialized in working with difficult artists, and we wouldn’t be here without her.”

During the Porch breakdown, he lifts up his guitar under a stage light and uses it to reflect light onto people all throughout the audience. The second encore starts with another compliment, “you make it very difficult to leave,” before trolling the audience with “whatever happened to the Toronto Maple Leafs?” During Better Man, Ed holds the song in a loop and banters for three minutes about looking forward to going home, having just taken a quick shot of tequila backstage, a driver on the first stop of the tour speaking offensively, the contrast between that start to the tour and the end in an exemplary city.

Boom is introduced before Crazy Mary, Mike jams alongside him on a fiery solo while Ed enters the crowd to mingle. Toronto native Donna Grantis is again introduced to join the band for Baba O’Riley (after also playing at the previous show), and Ed acknowledges Geddy Lee at the side of the stage, to which the band plays a bit of Cygnus X-1 again. Ed signs off with a personal “see ya, JP” to a fan he sang Thin Air with at the first show, before addressing the entire crowd:

“We the northwest, a pleasure being in the north,”

and signs off as Geddy Vedder one last time.